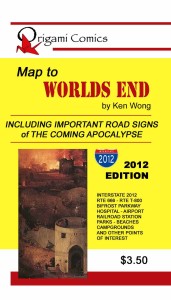 Map to WORLDS END is an experimental comic designed to stretch and explore the boundaries of comics art. It takes the form of a road map and is meant to be ‘read’ not like a regular comic but in the same way that maps are read.

Is it still a comic? I think so: it juxtaposes words and pictures in very deliberate ways with the intent to tell a story.

Almost all of the place names are references to eschatological and apocalyptic stories or theories. These include familiar religious prophecies as well as scientific and science-fiction ones.

One of the interesting aspects of this comic is that I tried to ‘draw’ as little as possible. This was originally an idea that I’d proposed to a friend as an example of the kind of comic that could be done even by someone who wasn’t satisfied with their draftsmanship skills. Most of my work consisted of adapting, altering and arranging the various graphic elements. Where illustrative artwork was needed, I appropriated details from famous public-domain works by Hieronymous Bosch, Albrecht Durer, Edvard Munch, Claude Monet, and Katsushika Hokusai.

EXPLORING the Map to World’s End…

Several readers have asked me to confirm or explain some of the apocalyptic references in my MAP so I’m happy to outline the overall and general references while also shedding a little light on a few of the most obscure ones. That said, while I am happy to answer specific questions from readers, I do NOT intend to detail every single reference. After all, exploration is part of the fun of having a map and I have great confidence in your Google-fu abilities!

Obviously, most of the street/place names are references to apocalyptic scenarios. These references take many different forms:

Everything in my MAP is there for a reason. I hope these notes (plus access to the Internet or your local library) helps lead you to an exploration of these references. If you still have questions (or just want to confirm your hunches) about what I intended, feel free to contact my by email or stop by at one of my convention appearances.