“FLEXAGON!” , which debuted at the 2010 MoCCA Festival, is by far the most complex origami comic I have made to date. The form was first suggested to me by my brother (a math teacher) and, although I was intrigued and determined, creating a flexagon comic proved to be a huge engineering and creative challenge. There were several points in the creative process where I almost gave up and decided that creating a trihexaflexagonal comic was simply impossible. 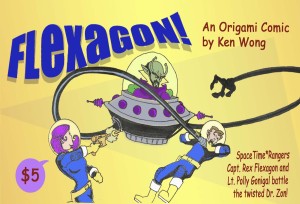 FLEXAGON! is a sci-fi adventure starring the intrepid Captain Rex Flexagon and his lovely partner Lt. Polly Gonigal of the SpaceTime*Rangers as they battle their arch-nemesis Dr. Zon in an endless adventure that cleverly melds form and function for a unique comics-reading experience.

FLEXAGON! is an origami comic in the form of a special mathematical shape known as a ‘flexagon’ (specifically, a trihexaflexagon) designed to be ‘flexed’ and flipped to reveal different ‘pages’ as the story is read. Each hexagonal ‘page’ is made up of six triangles which change their visual orientation relative to one another when the flexagon is ‘flexed’ or ‘flipped.’ Because of this property, using this shape to create a comic proved to be extremely challenging.