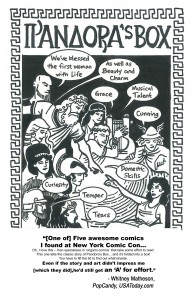 Pandora’s Box is my re-telling of the ancient Greek myth in the form of a box-shaped comic.

In September 2007, I attended the opening reception for Infinite Canvas: The Art of Webcomics, an exhibition at the Museum of Comic and Cartoon Art (MoCCA), where I met comics theorist Scott McCloud as well as several other webcomics creators and had the opportunity to participate in various discussions regarding the merits of webcomics compared to printed comics.

A commonly voiced view that night seemed to be something along the lines of “webcomics are the future because anything printed comics can do, webcomics can do better.”

Since I often enjoy playing “devil’s advocate” in debates, I was among those who – although our very presence at that night’s reception made us obvious supporters of the webcomics movement — contrarily maintained there were still many things print comics could do that webcomics could not. Our strongest argument in favor of printed comics was that they offered readers a physical/kinesthetic experience that webcomics could never duplicate; readers could bend, fold, tear or otherwise manipulate the comic in ways that are impossible to duplicate onscreen.

At some point, it occurred to me that one could use origami, the Japanese art of paper folding, to create a comic in which the reader’s physical interaction with the comic as a tangible three-dimensional object was essential to the experience and, therefore, impossible to do as a webcomic.

When I returned home, I decided to put theory into practice and the result is Pandora’s Box, a comic which readers must open and unfold (and, ideally, refold) as part of the reading experience. Crucially, the box is to be opened at precisely that point in the story when such an action is loaded with the greatest significance.

In order to create Pandora’s Box, I first researched origami designs until I found a simple box that could be made from a single sheet of paper. Next, I had to come up with a page layout and design that would naturally lead the reader’s eye from one side of the box to the next in the proper panel order. With the layout firmly established, I then had to edit my story (both art and text) to fit the differently sized and shaped panels. And finally, I had to make sure the boxes could actually be physically folded, unfolded, and re-folded as intended.