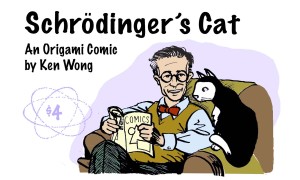 Schrodinger’s Cat is an origami comic in the shape of a “fortune teller.”

Schrodinger’s Cat, which debuted at the 2009 MoCCA Art Festival, is an artisanal comic presented in origami form (in this case, the “Fortune Teller” that you may remember from childhood) so that readers must physically manipulate and unfold the work in order to read the story and learn the cat’s fate.

By special request, here is a quick KEY to the comicbook multiverse references in my Schrodinger’s Cat origami comic: